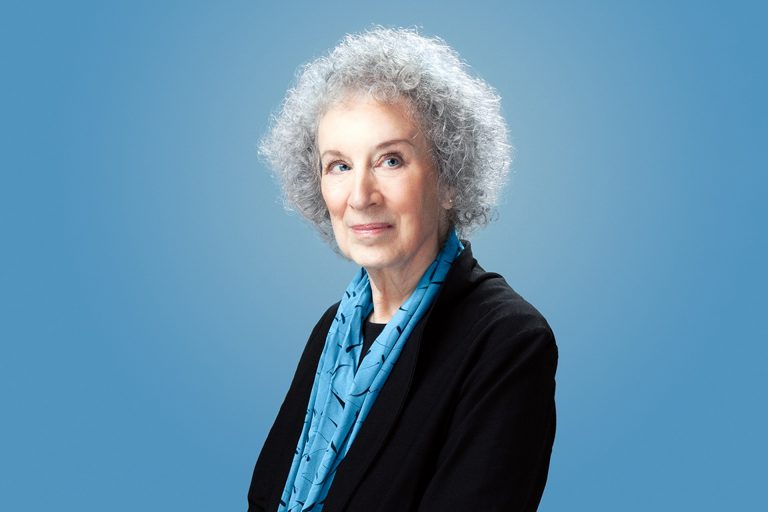 Atwood’s stories defy the sci-fi tag; she prefers to call them speculative fiction. “My books build on ideas and concepts that already exist,” she says. Her new novel, The Heart Goes Last, is true to form: tapping into her signature knack for combining disturbingly realistic futures with dark comedy.

Atwood’s stories defy the sci-fi tag; she prefers to call them speculative fiction. “My books build on ideas and concepts that already exist,” she says. Her new novel, The Heart Goes Last, is true to form: tapping into her signature knack for combining disturbingly realistic futures with dark comedy – in this case, a love story gone wrong in a lawless America. “My stories all have a comic twist,” she says, “but they wouldn’t be as funny if they were real.” Here, the 75-year-old literary giant talks about sex robots, comics and the future of books.

You often write about real scientific concepts. Which topics fascinate you now?

Margaret Atwood: In the new book it’s sex robotics. Those are making great strides. They do really have ones with warm body temperature in Japan and there’s a creepy site with a video that has a robot girl saying things like “touch me, touch me now”. They’re a bit like Barbies, the ones that can talk. Even back in the 50s there was a doll called Chatty Cathy. So this is the advanced version of those.

The Heart Goes Last started out as a digital serial for storytelling platform Byliner. How did you find writing for that form versus a novel?

It’s a lot of pressure; you have to write quickly. I did four stories over eight months. But I don’t change my style or what I write. When I turned it into a novel I had to remove repetition – you need it when you’re writing in serial form, because you have to remind readers what happened. Dickens wrote in serial form. That’s why the pacing is the way it is – each chapter ends on a cliffhanger.

Did you find having real-time feedback from readers during the writing process useful?

I got a lot of feedback, but it didn’t impact the final novel in any way. You see the same with [George RR Martin’s] Game of Thrones. No one knows the end, not even the writers of the TV show, because he hasn’t published the last book yet.

You’ve embraced social media more than many authors. How did you get started?

I’d say I’ve explored technologies, not embraced them. Pinterest is good for people in visual arts, design decoration and so on, but for a writer there’s no point. It started when I built a website for the launch of The Year of the Flood, which I had never done before. Back in 2009, the publicity team said, “You should have a Twitter feed. It’s really easy, we’ll show you.” So I started on Twitter.

A lot of authors – especially women – have seen social media used for harassment.

Twitter has given harassment a larger platform. For vulnerable people it can be devastating. The equivalent in Agatha Christie murder mysteries is the poison pen letter. Mary Beard deals with it well – she confronts these people publicly. I think it’s worse for women online. It’s part of an old tradition of misogyny, but more for young women because they are objects of desire. Once you get to the granny stage, which I’m at, it happens a lot less.

Aside from writing, you also invented a remote-signing device, the LongPen, and spun out a company based on it. Have you always been entrepreneurial?

I grew up in the woods, so you had to improvise. I knew about machines before they were digital. I could fix my own outdoor motor, take apart my sewing machine and put it back together. Entrepreneurial is what writers had to be in Canada in the 60s – the book tour and the reading events were invented in the 70s and 80s. Things are invented when the need arises. LongPen came out of that; this was before e-books, tablets and the iPhone – it started in 2004. We thought it would be great for a writer to be virtually present. Now the business has evolved. It’s remote signatures for things like banking.

You recently wrote a novel for the Future Library project, which won’t be published for 100 years. What do you think the world will look like then?

There’s two versions of the future that could exist – the good version and the bad. By writing and storing something for 100 years, you’re gambling on the good version – that humans will still be alive and able to read, that there will people who will care about reading, that the Oslo Library will have survived.